HomePOLITICESHere is who will be able to vote for the House and...
POLITICES 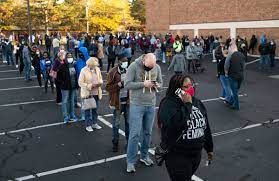 Yesterday the deadlines for requesting the calling of the confirmatory referendum on the law that will allow the election of senators in the 18-24 age bracket, which has been prohibited until now, expired. Starting from today, every day will be the useful one in which the President of the Republic Sergio Mattarella will be able to proceed with the promulgation of the law.

With this provision, the next political elections in 2023 will see the participation of all adult citizens in the election of members for both the Chamber of Deputies and the Senate .

The possibility of a referendum has matured, after the proposal, in the second step, did not reach a qualified majority of 2/3 among the members of each parliamentary branch, useful to avoid popular consultation, but the mere absolute majority. For this reason, within 3 months of the publication of the measure in the Official Gazette, which took place on 13 July last, one fifth of the members of a Chamber or five hundred thousand voters or five regional councils could have requested the opinion of the Italians, based on article 138 of the Constitution.

The future law and the result of the constitutional referendum on the reduction of the number of parliamentarians, held last September, will lead to a very different composition of the next Parliament: 400 deputies and 200 senators eligible for all Italians of age ; no longer 630 deputies chosen by the over 18s and 315 senators appointed by the over 25s . However, the minimum age for eligibility will remain changed: 25 years for members of the Chamber and 40 years for members of the Senate.

This radical change was achieved through the simple elimination of the words “by voters who are over the age of twenty-five” from Article 58 of the Constitution, which describes the election procedures for the Senate.

The current article 58. Senators are elected by universal and direct suffrage by voters who are over the age of twenty-five. Electors who have completed their fortieth year are eligible as senators.

The new article 58. Senators are elected by universal and direct suffrage by the electors. Electors who have completed their fortieth year are eligible as senators.

More Quality Content Is Needed In Media, According To Niv Jacobi